A GUIDE: Sugars According to Traditional Chinese Medicine⠀

WHITE SUGAR⠀
During the refining process, moisture, minerals and compounds giving unrefined sugars their color are removed, and white refined sugar is the result. No medicinal value in TCM. 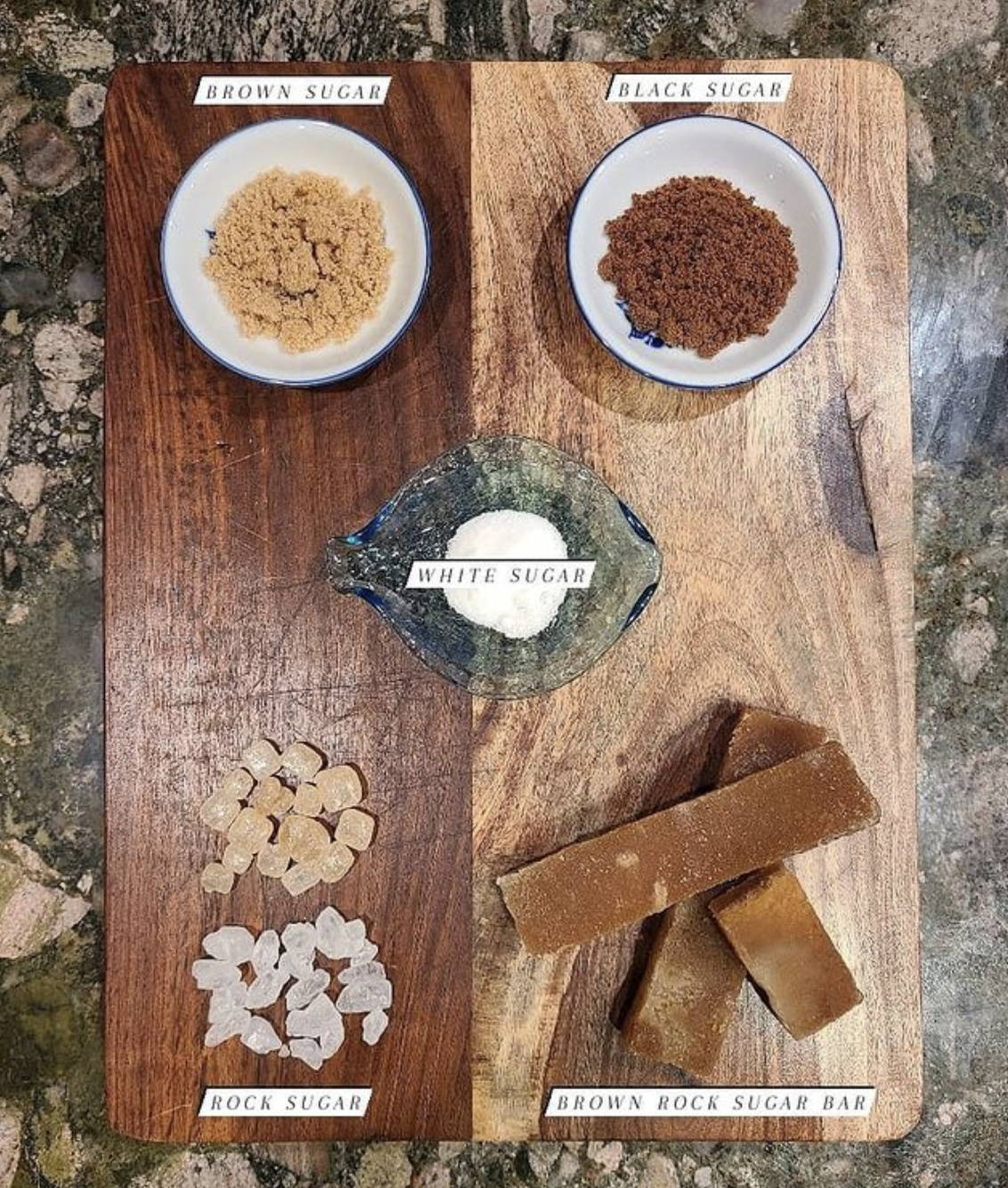 BROWN SUGAR⠀
Made from refined white sugar, with molasses added back for flavor and to create a higher moisture sugar. The amount of molasses accounts for the color and flavor differences of light vs. dark brown sugar (3.5% vs 6.5%). It has no meaningful nutritional benefits over white sugar. “Brown sugar” in a Western recipe usually refers to light brown sugar, whereas in a Chinese recipe, it refers to black sugar.⠀
⠀
BLACK SUGAR⠀
Unlike white or brown sugar, black sugar (aka Chinese brown sugar) is unrefined: it is sugar made by slow-cooking sugarcane juice. It also has a powder-y texture, with a deeper, complex flavor. Black sugar retains the trace minerals of sugarcane juice including potassium, iron, and calcium. Hues of this sugar vary—darker does not mean better. Black sugar is grouped as a “warming” food in Chinese medicine and is widely used therapeutically.⠀
⠀
In a recent article in @finedininglovers: “In Japan, along with neighbouring China and Taiwan, black sugar isn’t just a delicacy, but also a common remedy for colds. Mixed with ginger tea, it is said to relieve nausea. It is even used by some women to treat menstrual pain thanks to its iron.” There’s also a bit of a black sugar craze in Asia: it’s “a darling of the Instagram generation [with] consumers queuing up for hours on end from Taipei to Singapore” (SCMP).⠀
⠀
ROCK SUGAR⠀
Refined from the recrystallization of sugar, with less intense sweetness. Can be yellow or white. The polycrystalline variety has “cooling” qualities and is used in Chinese medicinal recipes such as steamed pear with rock sugar (a home remedy for cough/sore throat) or snow fungus soup. However, it does not have nutritional benefits like black sugar.⠀
⠀
BROWN ROCK SUGAR BAR⠀
Made from residual fluid after rock sugar production, brown rock sugar bar is considered to have the same “cooling” properties as rock sugar.⠀
⠀
What are your thoughts on these sugars?